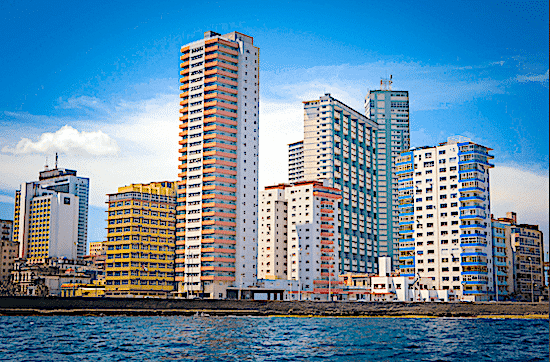 From the moment you arrive, the city surrounds you with its magical atmosphere that is like something out of a movie from the 1920s, its streets, its roofs, its houses, all of which are mixed in an interesting sample of its culture and its way of being very typical of the Caribbean.

Here you will find emblematic places like the oldest pharmacies in the city, as well as the Bar Floridita famous for the visits of the writer Ernest Hemingway or the emblematic statue of the gentleman of Paris, you can also make a visit to the theater of Alicia Alonso the most famous dancer of the island.

In the city there is a lot to see, hotels, famous restaurants, art galleries, many cafes and above all the sway of people who make the city a metropolis that surrounds you with its natural and architectural beauties even when they are in a high degree of deterioration the buildings do not lose their unique beauty.

You can also go for a bike ride which, by the way, is a very used means on the island and above all you can and should not miss a walk at sunset on the emblematic Havana Malecon where it is very common for people to walk at all hours of the day, since it is a good opportunity to feel the sea breeze on your face.

This way you can also visit the market where you will interact with the islanders who are very jocular and above all very attentive to visitors or you can take a ride around the capital riding in a horse carriage which will make your visit a unique one.

Also, you can take a ride in the famous almond trees that are cabs but have that distinctive name so they are old cars which will make you feel like you are in a trip to the past, it is as if time has stopped on the island.

As you can see, there is a lot to know and above all to visit in the Cuban capital, so I think that this is a visit that you should not postpone anymore, so I wish you luck in your trip.

The history of Cuba is divided into three stages that are extremely important: the colonial stage, the neo-colonial stage and, last but not least, the revolutionary stage, which corresponds to the criteria for the formation of Cubans as we know them today.

But in spite of the many socio-political problems that Cubans have had to live through, today they are a people who are looking for ways to survive, a very heroic people, who are fighting every day to improve their standard of living, in spite of the many vicissitudes and obstacles they have to face, they are one of the most beautiful places in the world.

And the best thing is that it has managed to place itself at the top of the tourist options par excellence today, so that all the tour operators always have among their most attractive offers a visit to the beloved Cuba and one of the most popular destinations is Havana.

Havana, formerly known as the City of Havana, is the current capital city of the Republic of Cuba and at the same time one of the fifteen Cuban provinces. Havana is the most populated city in Cuba and in the entire insular Caribbean, with a population of more than two million people.

Founded in the spring of 1514, further south, under the name of San Cristóbal de La Habana, Havana is the main center of the nation’s political, economic, and socio-cultural life, hosting the offices of the government and the Cuban Communist Party, as well as the country’s main cultural and scientific institutions.

La Villa de San Cristóbal de La Habana, was founded in the name of the King and Queen of Spain on November 16, 1519. Its name comes from the fusion of the name of the saint chosen as patron saint, San Cristóbal, and the name by which he was known in his first settlements: Havana

The current capital city -whose genesis is in the town of San Cristóbal de La Habana, settled for the third and definitive occasion next to the bay of Havana, and that in its excessive growth towards the west, south and east, other settlements were annexed between the XVI and XX centuries-, constitutes a great metropolitan urban nucleus. Some of the territories that integrate it had reached titles of city or villa: Marianao, Guanabacoa, Regla. Others were typified as towns, villages or hamlets, being united to the city by means of new localities called neighborhoods, distributions or communities.