The elegant 5-star Iberostar Grand Packard Hotel is located on the emblematic Paseo del Prado, next to iconic buildings such as the Velasco Palace or the National Capitol in Havana. The accommodation has 321 rooms that are designed to provide the best rest and comfort. All of them are equipped with air conditioning, satellite TV, minibar (with supplement), safe, iron, hair dryer, coffee maker (for payment), free high-speed wireless internet connection and 24-hour room service.

The new hotel Iberostar Grand Packard will open its doors in this capital next September 10, as part of the program to increase the hotel infrastructure of the Greater Antilles, officially reported this Thursday. A statement released by the Spanish company Iberostar, added that this facility will open its doors on the date mentioned at full capacity.

The note indicates that the great effort made in meeting deadlines in the execution of the works allows the opening before the scheduled date.

The text states that the hotel chain Iberostar Hotels and Resorts opens its new luxury hotel in Havana, the Iberostar Grand Packard, the highest exponent of quality and exclusivity of this Spanish company in this archipelago.

Iberostar Grand Packard (operated by the Spanish firm and owned by Cuba) will operate from next week at full capacity, with a very professional team.

Iberostar Hotels & Resorts takes care of every detail so that this singular hotel, framed within the segment of urban hotels and Grand luxury category, is an example of its commitment to excellence and customer experience, insisted the note.

The report also states that the facility combines the architectural value of the building, which resurfaces from its original façade, with innovative and exclusive lines, with 321 rooms and luxury services.

The hotel, a Havana classic, once welcomed celebrities such as Pablo Neruda or Marlon Brando, and now preserves the essence of Paseo del Prado, the most important avenue in Old Havana, where it is located.

In addition, this hotel of modern structure, exhibits the most spectacular views of the capital towards the Malecón and the Bay of Havana, as well as the Castle of the Three Kings of the Morro.

Iberostar Grand Packard is reborn with the vocation of being a reference in the sector of business tourism and conventions – MICE-, since it has exceptional facilities for corporate events.

The building, close to iconic buildings of the Cuban capital such as the Velasco Palace (currently the Spanish Embassy in Cuba), the Bacardi or the National Capitol, has a concierge, medical practice, laundry and several categories of rooms (standard, mini suites, junior suites and suites, as well as those located in the Star Prestige zone, in a differentiated area and with special services).

In addition, high standard services such as pillow menu and gourmet cuisine are included. Tents are added, a central patio with a glass roof and heated, Spa, Jacuzzi, swimming pool for 130 people on the sixth level, meeting rooms, fitness room, rooftop terrace with an attractive view of the entrance to the bay and the Historic Center, and cigar lounge.

The building, built according to environmental standards, has a semi-underground parking, with all the requirements to avoid sea penetrations in case of natural phenomena.

In the area where the hotel was built, which in its construction includes an old façade that was conserved (most of it by Cárcel Street and another by Prado), once stood the old hotel Biscuit, inaugurated in 1911 and that in 1931 acquired the name of Packard, alluding to the American brand of automobiles.

The opening of this emblematic building coincides with the preparations for the 500th Anniversary of the founding of Havana, and the 25 years of presence in Cuba of Iberostar Hotels & Resorts. (With information from Prensa Latina).

If you are looking for a more private accommodation we invite you to see our amazing luxury villas in Havana. 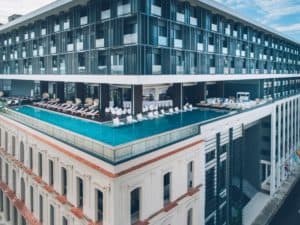 The Grand Iberostar Grand Packard is located on the emblematic Paseo del Prado. The hotel offers a gymnasium and a swimming pool. In the restaurant you will find the spectacular show cooking. The rooms are equipped with air conditioning, satellite TV and coffee maker. In addition, children would enjoy the fun activities offered by the hotel.